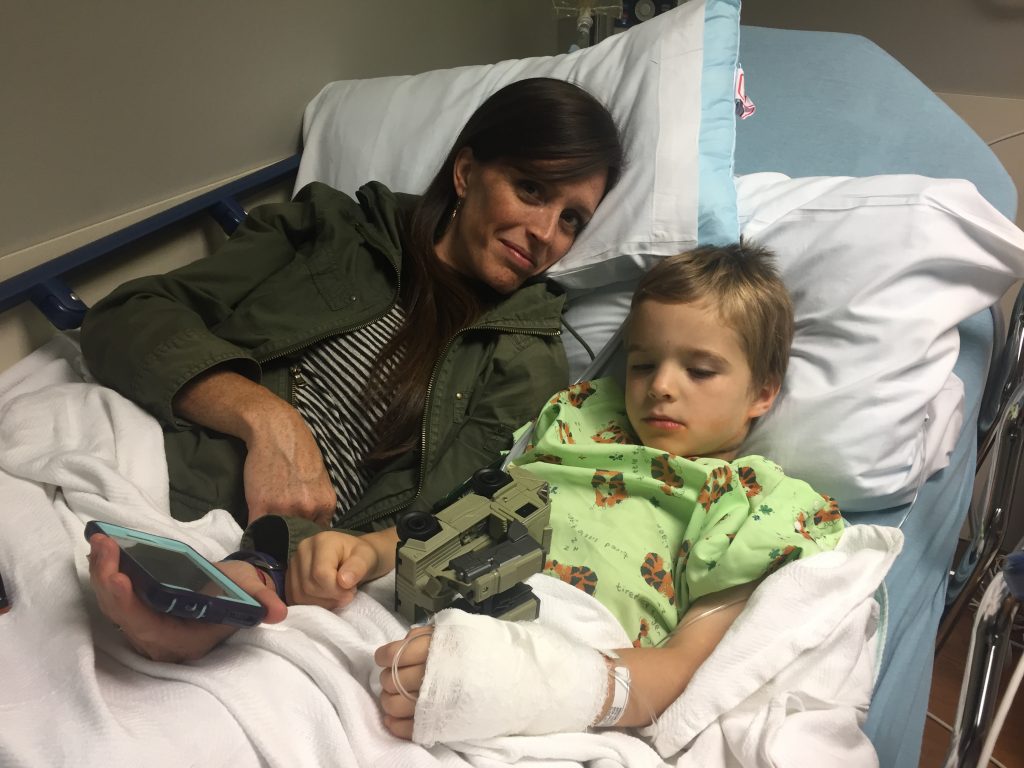 A couple months ago, we noticed lumps on our youngest son Liam's neck. At his next doctor's visit, we asked about it. After giving him antibiotics for a bacterial infection, the lymph nodes got a lot smaller, so we thought we were good.

A couple months later, they were large again. So, we went back to the doctor, who referred us to an Ear Nose & Throat Doctor. He scheduled an ultrasound, and after checking the lymph node, was uncomfortable with how large it was (over 2cm [1 inch]).  He said we could just wait and see or remove the lymph node for a biopsy (which he recommended).

After the visit, it set in that he could be sick. And then a million other things follow that line of thinking. Here we are planning to sell the house and travel with our family, and the possibility that everything will be halted in favor of helping our son through treatment of a disease suddenly becomes very real.

We scheduled the biopsy, and tried our best not to think about it.

The morning of surgery was scary, we were nervous, but we tried to stay strong for Liam. Fortunately, they scheduled the surgery super early. We had to be at the hospital at 6am, which was a good thing because Liam wasn't allowed to eat anything before the surgery. And he wakes up wanting to eat…and continues his day in that trajectory (he's a constant snacker).

We didn't make a big deal out of the appointment, or what was going on. Liam is only 5, and he's anxious anyway. So we didn't want him to be unnecessarily nervous. We were going through with the biopsy, and we didn't want him to freak out. We told him about how he would be able to wear a mask like Darth Vader and that we were going to see Dr Cline (his doctor, whom he likes) so he could look at his jellybean (his lymph node).

The only problem with this approach is that it took way longer to get everything going than we thought, and Liam didn't end going into surgery proper until about 8:00am. That was 2 hours of waiting around and trying to keep him distracted. He doesn't like hospitals, or shots, or doctors offices at all, but he's never been to an actual hospital (it's more the idea he's afraid of). At one point he looks around and goes,

Around 8:00am, they moved us into the pre-op area, and that's where it got hard. Differently than the closed waiting room we were in, this room was filled with other pre-op patients with only curtains separating them. This spiked his anxiety levels and he was now on high alert. When it came time for him to go into surgery he asked “Are you coming with me?”, to which we had to reply, “No, we can't, but Dr. Cline will be there.”

He didn't want to go.

He got a little upset and clingy (which I would expect anyone to get. Who wants to go to surgery.) Fortunately, one of our friends, who is a nurse in that department came in and distracted him from his fear by telling him all about the room and the lights and what he could expect, and waved us away while wheeling him toward surgery.

Afterward, Dr. Cline told us that he was very brave and didn't cry at all during the process.

We waited through surgery, wringing our hands all the while, then the Dr. came out and told us it went as well as it could have, with no issues or complications, along with instructions on how to care for Liam's scar etc.

He was in rough shape when he woke up. Meagan was the only one allowed with him during that time. According to her, he was disoriented and irritated, and thrashing and yelling until they gave him something to calm him. We waited for another hour or so before taking him home. He didn't know what had happened until Meg showed him the cut on his neck. To which he responded,

“Dr Cline put me to sleep and took my jellybean? He's kind of like a bad guy…only bad guys take stuff when you're sleeping.”

We loved this perspective. He wasn't made, he wasn't afraid, he wasn't shaken. Just moving forward, taking the next step with us.

They said we'd have the results within the next week. Five days later, we got the results, that it was not a tumor, it was not cancerous, it was just a normal overactive lymph node.

It's crazy to consider how much our lives could have been altered so quickly. It makes us realize how important our time together is.

There have been a lot of events in the last couple of years that make us appreciate our time together, our health, and continually remind us of what's important.