This week's video, some places we've been, Meagan's race, and a few photos (at the bottom).

I intended to get this out last week, but it didn't work out. Our internet was terrible where we were and I couldn't get a reliable signal fast enough to upload the video.

We left Traverse City and went to St. Ignace and stayed at Tiki RV Park. This place was ok, but pretty much no frills. The spots were pretty close together, but the facilities were decent, there was a laundry room, and it was ideally located, about 3 blocks from the main road in St. Ignace. It was perfect for what we were doing.

What we were doing in St. Ignace

Well, our main reason for going there was Mackinac Island, but we ended up getting a treat and being able to walk the Mackinac Bridge for the annual labor day Bridge Walk. The Mackinac Bridge is a 5-mile suspension bridge and is the longest of its kind on the western hemisphere. It was truly a feat of engineering to build such a massive structure to connect the upper peninsula to mainland Michigan. Of course, we recorded all of this, and it's coming next week -- so stay tuned.

Meagan had her birthday in St. Ignace, so we went out for breakfast, had ice cream, walked around the city and checked out the Museum of Ojibwa Culture (now known as Chippewa). We also learned that no matter the spelling (Mackinaw or Mackinac) it's always pronounced "mack-in-awe". We finished the day off by watching Fireworks over the water -- all in all, not a bad way to spend your birthday. Enjoy the video!.

One month on the road - What we've been up to

Last Monday marked one month on the road. For the first 3 weeks, we were covering a lot of ground. We didn't stay anywhere longer than a few days, and drove a lot. In total, we've moved our camper now 13 times. We learned a lot about the difference between what the GPS says, and how long it'll actually take. I haven't figured out the exact ratio, but it's something like 1.25x (if the GPS says 4 hours, it'll be 5, if it says 5 hours it'll be 6 1/2 and so on. The main reason for covering so much ground so fast was to try to take advantage of sightseeing on the way to Mount Rushmore where Meagan ran the half-marathon.

A few notes on that.

Before the race, we spent the entire week checking out the black hills and Custer state park. Custer State Park is over 73,000 Acres. So what happens is you drive in...and you keep driving forever. There's so many scenic drives, amazing views, tunnels cut right through the rock, and don't forget Bison! Loads of Bison roam the park. So many that you have to watch where you're stepping if you know what I mean. We also saw prairie dogs, big horn sheep, and antelope. Custer is amazing. But also huge.

We moved the day before the race to an RV park closer to the race start since we knew we'd have an early morning. That came in handy, 'cause we got up SUPER early to get there (read: 5:30am). The Mount Rushmore Half Marathon went up Iron Mountain Road for 7 miles, then down for 5, then went up and down for awhile and into the finish line. Before I continue...let me say that again...it went up for 7 miles.

And I don't mean like some gradual uphill that's no big deal...I mean long haul climbing uphill. Anyway while she was running up the hills and around the curves, the views were spectacular and there were so many times she could see Mount Rushmore and the black hills, mixed with the ponderosa pines and granite rock. As she said, "This is exactly what you want out of race".

Her finishing time was 1h 57m.

She was happy with the event, especially since she hasn't been able to train for the last month. Even with good intentions, the logistics are very complicated. It's not safe to just go for a 10-mile run in an area you don't know - especially if you're a woman. In any case, she did amazing, we were all happy to cheer her on at the finish line. This wasn't a very spectator friendly race, so it was basically a drop off, pick-up deal, which actually worked out well for us, since even when she finished it was only 9:00am or so.

After the race, we went back to the camper and napped before getting up and going to eat lunch and check out Rapid City (which is a super neat by the way).

We're slowing down now and not feeling the need to keep rolling as much since we're on the other side of Meg's half-marathon.

Where are we now?

We're currently in Utah, and man...it's pretty. The leaves are changing here now, which makes these massive mountains that much more beautiful, also the sunsets over the mountains are amazing.

We bought a boat for our trip and have been driving around with it in the truck. After doing a little research about the rivers here, I decided to take the raft on its maiden voyage. We paddled down a section of the Provo river that folks often tube on and had a blast. The trees were so beautiful. I was so happy with how well the boat did, and I can't wait to take it out again. As long as I'm class I to II rapids, I think it will handle them just fine. PLUS we had plenty of room, which surprised me.

The RV park we're in right now is immaculate. They also have all these really neat amenities. There's a playground for the kids, heated pool and hot-tub, an RV wash, which is pretty nice...and Bertie (our rig) is really dirty after staying in the badlands and dusty Wyoming. Side note: If you've ever seen the movie "Tremors" - that's exactly what it felt like where we were driving in Wyoming.

A MOUSE! In my TRUCK!

When we arrived last week, I opened the hood of my truck to check out the engine. When I did, I looked up and noticed a little field mouse was staring back at me. I tried to apprehend the little bugger, but he moved faster than me and disappeared into the wheel well. I suspect he climbed up in the engine compartment to get warm on one of these cold nights and the next morning I drove off with him. Not sure if he's a South Dakota mouse, or a Wyoming mouse, but I don't think he came from here. In any case, I have tried to find him multiple times with no success. He is either well hidden, or has moved on to a warmer living situation. Hopefully not my camper. I'm going to put out some bait and traps to make double-sure he's gone. I don't want chewed wires leaving us on the side of the road.

A lot more to come.

I wish I could sit down and do a daily digest, but I just don't have the bandwidth to do it. We've already seen so much and done so much, all of which is in queue and I've got photos and videos to share! 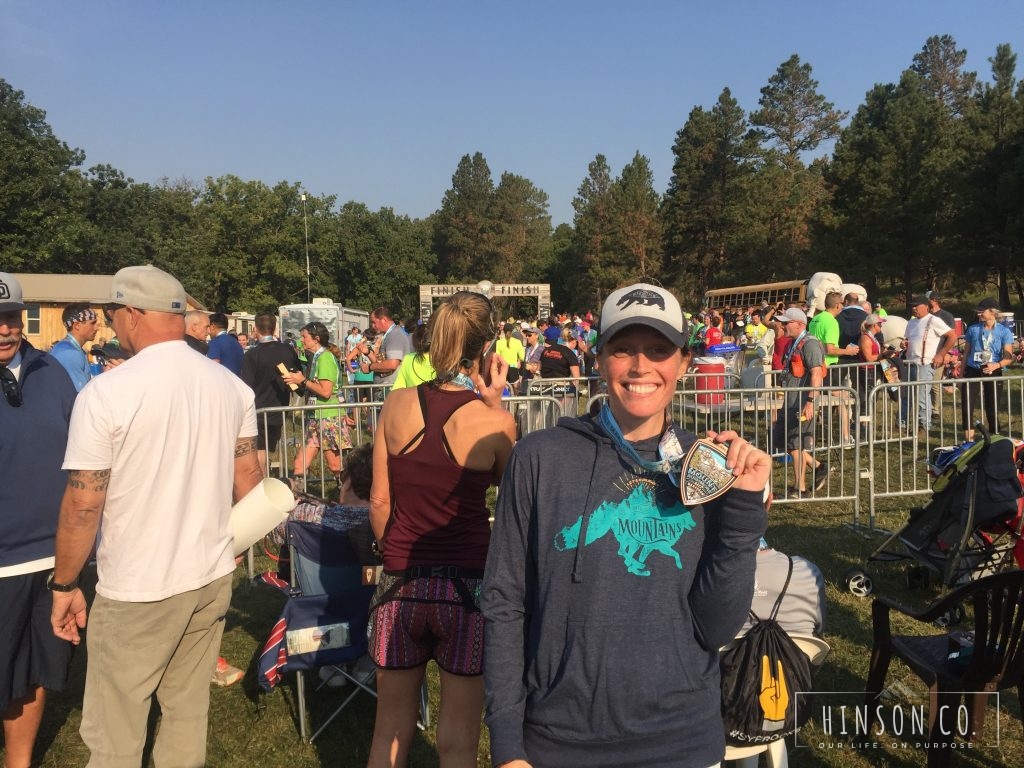 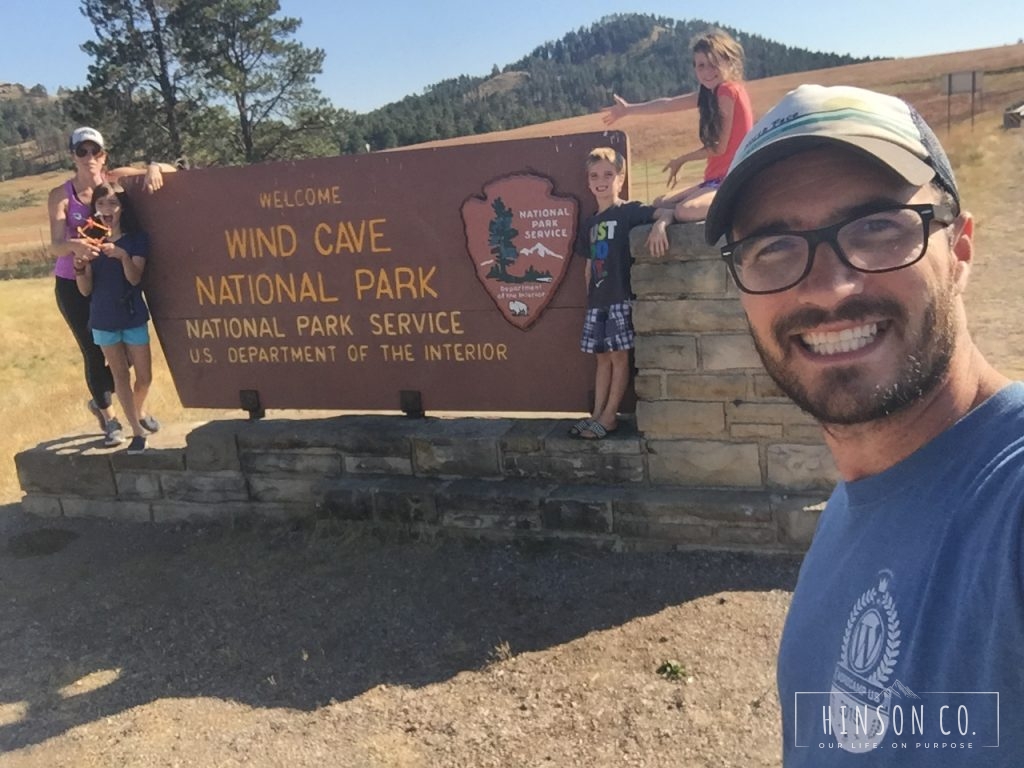 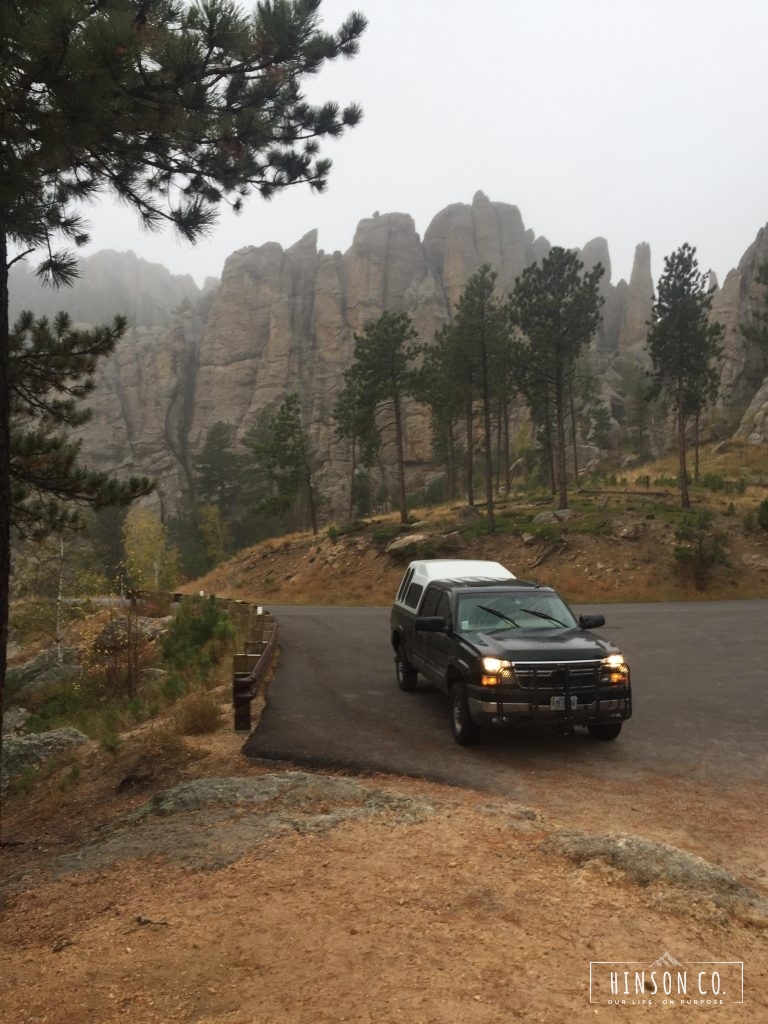 An overcast day to drive the Needles Highway in Custer 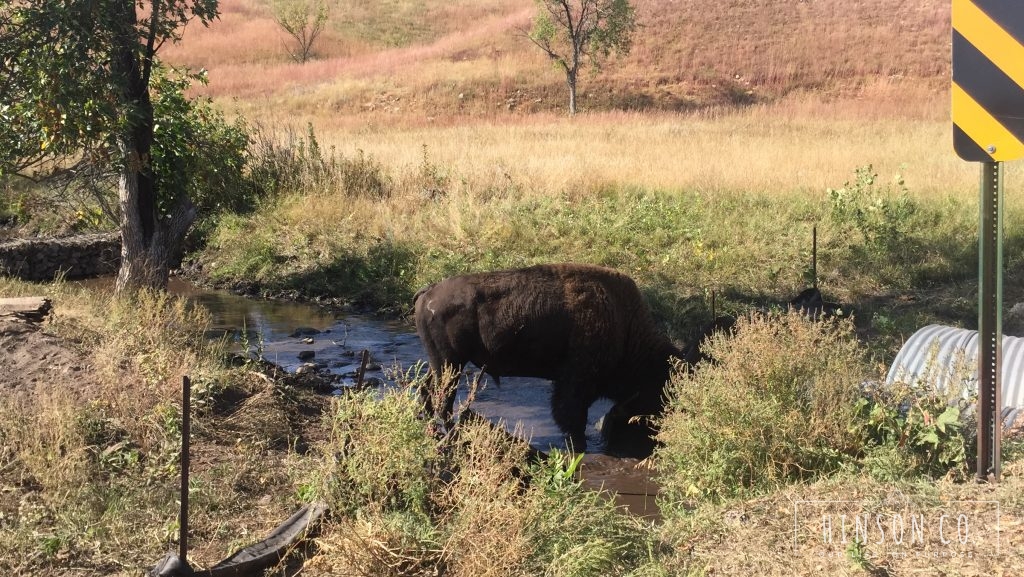 Bison (not buffalo) - a common site in Custer State Park 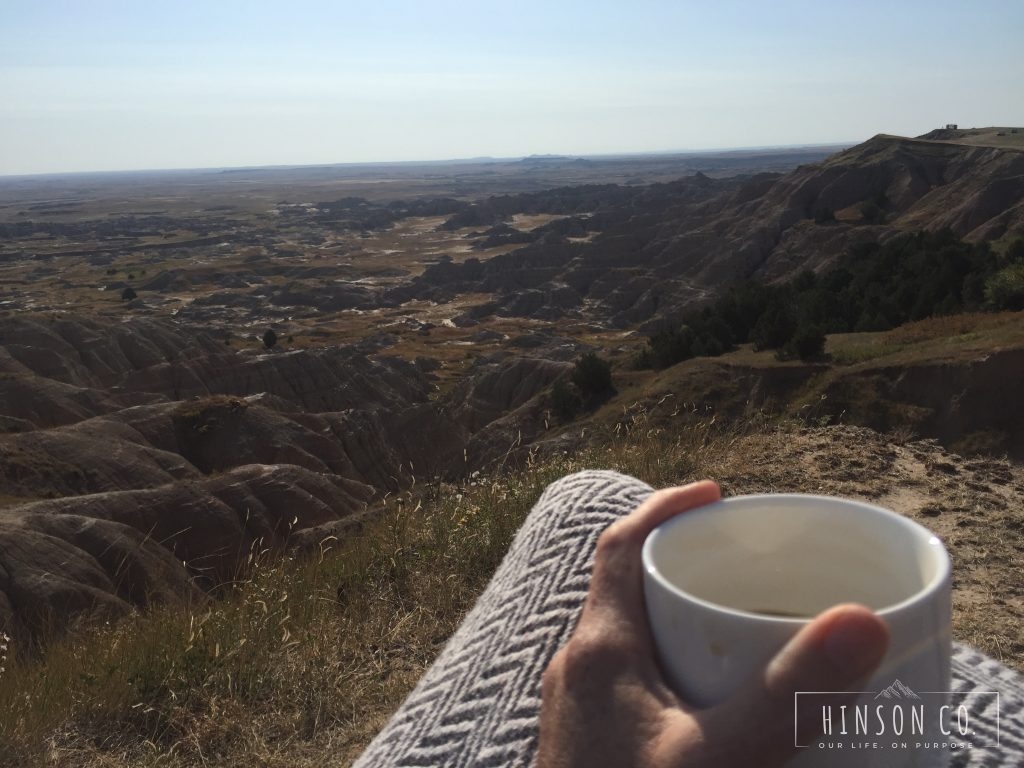 Coffee while boondocking in the badlands 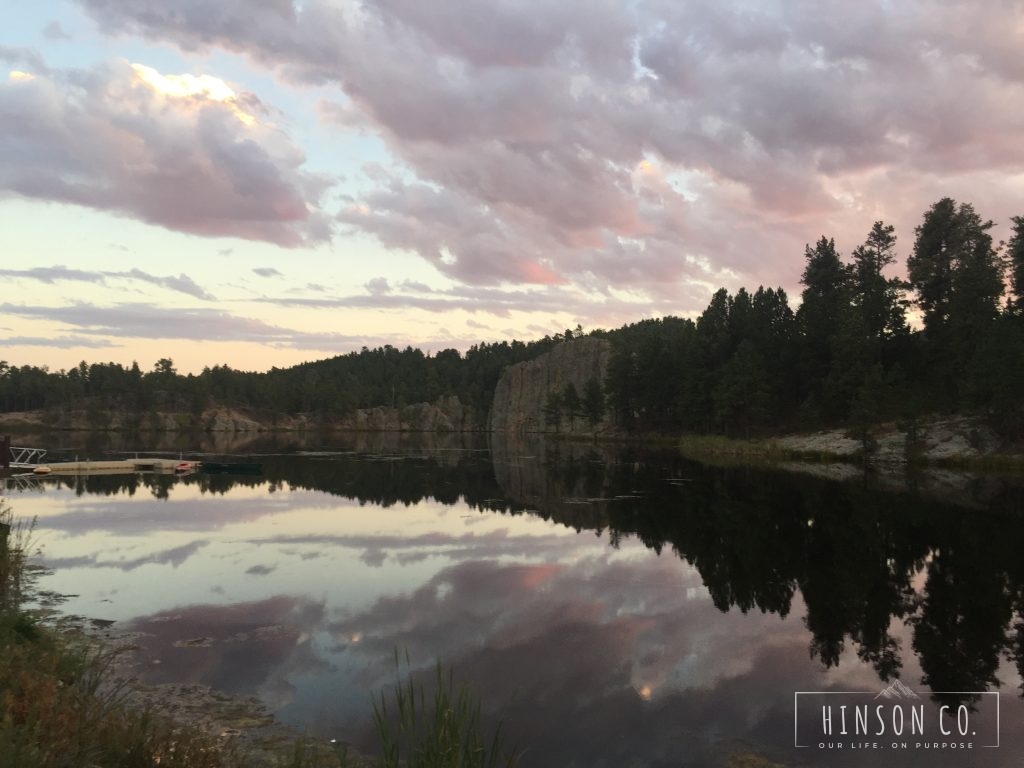 Meagan running through one of the tunnels on the route 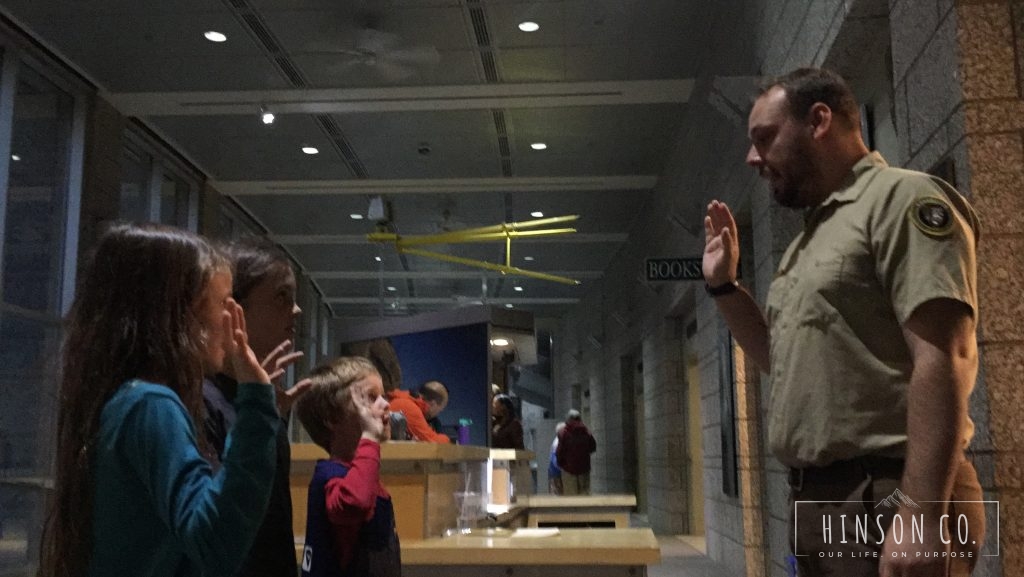 The kids getting signed in to be junior rangers