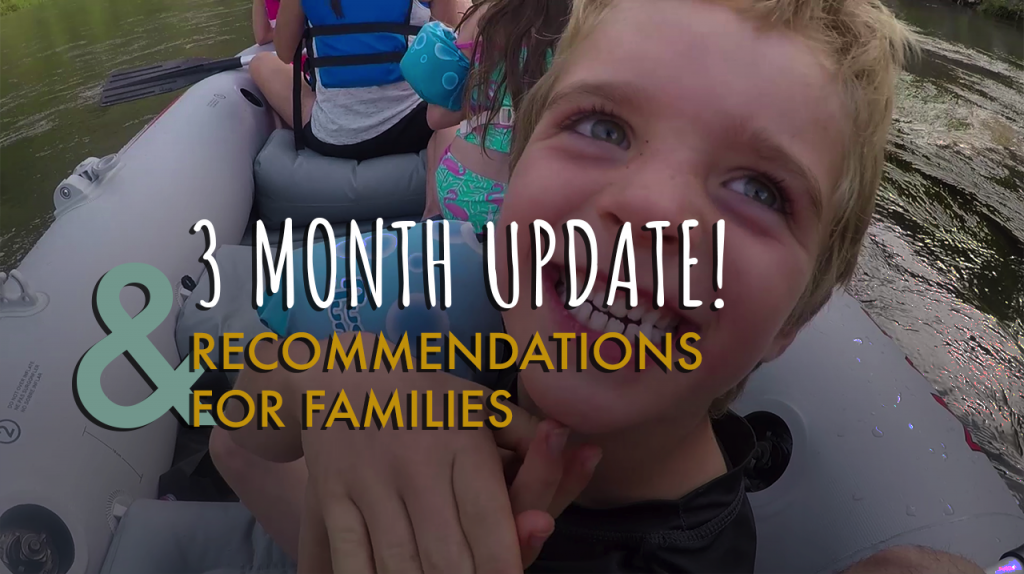 I hope you all had a wonderful Thanksgiving holiday! Though ours was a little different than normal, and while missing our family, it was still a very enjoyable time. Without fail, we ate more than we should have. We broke in our oven with a delicious breakfast of french toast casserole, then for our dinner we did the traditional Turkey (in the slow cooker), sweet potato casserole, and of course, brown & serve rolls amongst other things. Pretty amazing what you can do in a tiny little oven. We ate Thanksgiving dinner outside in 70 degree weather, with a view of the Catalina Mountains in the background.

In this update, I want to take a moment to share some of what we’re up to and provide a couple of recommendations for families like ours.

We realize that 20 minutes is a bit of a time commitment, so we’re going to try to start producing shorter videos instead of one long video. This way, the videos will hopefully be more frequent, but also easier to watch (if you’re into watching them). In any case, here are some videos we’ve made since our last newsletter:

Custer State Park is 75,000 square acres of habitat and park land. It’s ginormous, and there are tons of animals that make their home in the park. Though the park was incredible and it was such a nice place to camp, the lack of internet got us down. Remember, we’re doing life on the road, which means I need to be able to work, and we need to be able to research where we’re going next, make plans and book our stays. That means we need internet, and we booked this place without doing the proper research on cell reception.

This meant every morning I would need to get up, then drive up the mountain to clearer cell reception and meet with my team and work for a few hours before coming back down to camp. Not the worst solution, but it does get exhausting. That’s a fact of life on the road…you are subject to the infrastructure around you, so to make life easier, you really need to plan ahead.

After we left Custer, we drove up the road a bit to Rapid City (which is not far at all from Custer). Meagan’s race started promptly at 8am, and we knew we would want to be more conveniently located to the race start, so we moved to a campground in Rapid City.

After checking out the race expo and getting Meg’s race packet, we decided to spend the rest of the afternoon at Mount Rushmore. We all had a great time at the monument, and the kids did their first ever Junior Ranger packet, and were sworn in as Junior Rangers.

After doing this, we decided we’d make a point to make it happen as frequently as possible. They were so proud to be junior rangers. We now have a system that make it easier — more on that in a minute.

Meagan’s race was a half-marathon that was primarily on Iron Mountain Road (which is beautiful). Thing is, it was 7 miles of non-stop uphill, then 5 miles of downhill (approximately). According to Meagan, it was exactly what you want in a race. Watch the video to see her reaction.

While in South Dakota, we decided to make our way south through Utah. It was either that or go through Colorodo, which we were tempted by, but we wanted to go to Utah…and man, we’re glad we did. We saw all 5 national parks in Utah, and they’re all coming soon.

The first place we stayed was Heber City. While there, I wanted to break out the boat (the Mariner 4) and float down a nearby river. After doing some research, I found a bunch of info on tubing the Provo River, and used that to plan our route.

To our surprise, the leaves were changing and we got to experience the beautiful fall colors that were very reminiscent of home. In this short video, we tried to document the experience for you.

Fun fact: When Meagan and I were dating, my mom and dad helped me organize an adventurous date where we took a canoe down the James River. My parents helped us shuttle to the put-in, and we left a car at the take-out spot to make things easier. I packed a picnic lunch and we floated the James River together and had a beautiful time. Paddling the Provo River was the first time we had taken the kids down a river, and they loved it.

Another thing we did while in the Heber City / Park City area was check out Bridal Veil Falls and ride our bikes to/through Park City.

Biking Park City was especially amazing. Since this time, our bike situation has changed which has been incredibly frustrating. My bike bounced off our rig while driving through Moab, Utah, and Liam has now adopted Hannah’s bike and Hannah has been riding Meagan’s bike…so we’ve been 2 bikes down for awhile. Hoping to get that situated soon so bike rides can be back on the menu.

Obviously, we’re in the car a lot. One thing we’ve found that’s been incredibly enjoyable is listening to audiobooks and podcasts. Here are a few recommendations. I’ll compile an ongoing list at http://hinson.co/books.

How to be a Happier Parent, by KJ Dell'Antonia

Meagan and I started reading a book by my friend and author KJ Dell’Antonia, How to be a Happier Parent. In this book, K.J. hits the nail on the head for the issues that effect modern young parents, and her solutions have a lot more to do with the stories you’re telling yourself than actions you should be taking (but there’s that too). This book provides a delightful and encouraging view on parenting that will make you laugh through the realities that we all have. You’ll also find a much-needed perspective and practical steps you can implement along the way.

Our workflow for this book is that Meagan can read it, while I listen to it (Kindle and Audible Sync on most books to make this super seamless).

The Very Nearly Honorable League of Pirates: Magic Marks the Spot (audiobook)
This story is about a young girl who wants to be a pirate. But The Very Nearly Honorable League of Pirates will only admit boys, and her father, who is an admiral, insists she go to finishing school. That’s the last thing she wants. Fortunately, she’s not entirely alone. She travels with a magic gargoyle who also wants to be a pirate. They go to finishing school together and plan their escape. The narrator is very talented and the voices are all different and engaging.

Wow In the World (podcast)
This science focused podcast is extremely interesting and animated because it’s created for kids, but parents will learn quite a bit as well. It’s a whole family experience. Each episode is about 20 minutes long, so if you have a short trip, this might be the perfect thing to keep kids happy on the way.

A Movie For Grown-Ups

The Gurnsey Literary & Potato Peel Pie Society (Available on Netflix)
Our reception as finally good enough to stream, so we watched this last night and LOVED it. It’s a wonderful story set in the 1940s that tells the story of an island that was occupied by the German forces and a small group of neighbors that formed a book club and become family.

If you’re interested in doing the junior ranger thing with your kids, here’s the best tip we can provide. We learned this from another mom we met at an RV park. Note: This works for National Parks…but not necessarily state parks FYI. Research the park you’re going, google “[PARK] junior ranger packet” and you’ll find the PDF download of the junior ranger packet. Print it out, have your kids fill it in (as much as they can), then go to the park with the completed packet in hand. This will save you tons of time, and get the junior ranger business taken care of first thing.

It’s very time consuming to do the Junior Ranger program while you’re in the park. If we don’t do the junior ranger thing THAT DAY…we won’t do it. It’s just a fact. We’re really bad at the motivation to follow through on returning to the visitors center etc. We need to get it done first thing, so this tip keeps us on top of things.

Posted in Newsletter, Tips for Families