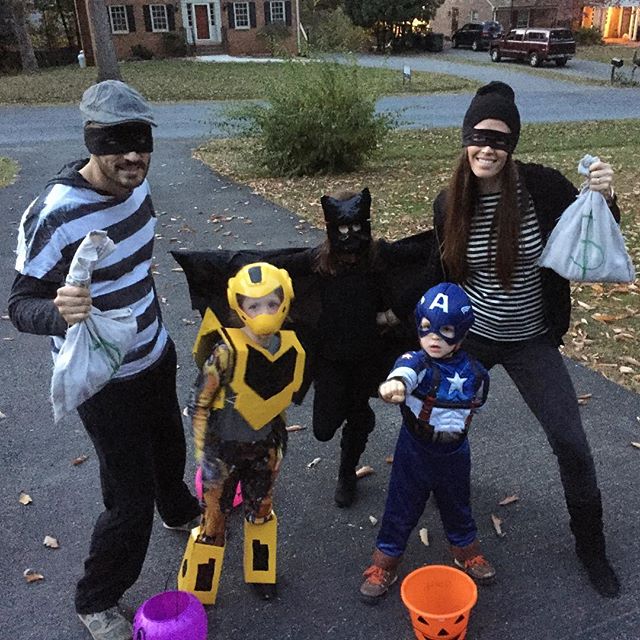 Halloween 2016 – We all dressed up this year

So this year, I spent more time than I have ever spent on halloween costumes. In total, over 10 hours. It all started when Norah wanted to be a transformer. How could I say no to that? So, we worked on making her a costume that looked like bumblebee. What I wasn't considering in all of this is how much time it would take to paint, let dry, paint again, let dry and repeat the process for a second color. I was really happy with how her outfit came out, and she really did look like a transformer — or at least it met my standard.

Hannah decided she wanted to be a bat. Meagan had the spark of that idea from something she saw on Pinterest where a girl had used an umbrella to be a “bat” for Halloween. Hannah wanted to do that as well…but we needed a mask. That's where the first half of the time went for her costume. We made a form of her face using aluminum foil, then used paper machet to create a really cool mask. While the glue was drying on the mask, we worked on her umbrella wings, which turned out to be SO epic. They were huge, so she could open her wings and she really did look like a bat. I'm not sure which one I was more proud of.

If one of them won an award for visibility, it would be Norah – she probably kept us the safest of anybody, since we weren't thinking straight and went out trick-or-treating without a flashlight. While Hannah's costume, on the other hand, was completely black, and she was nearly invisible in the dark.

We ended up going to Kirkley Circle this year to trick or treat, which was a lot of fun, and we'll be doing it again next year. Each kid had a couple pounds of candy when it was all over, and that will last them until we do this again.